From PokeClicker
Jump to navigation Jump to search 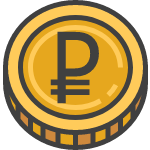 The basic currency of PokéClicker. They are obtained by defeating enemies and are spent on various Items

The following table presents the relevant information for gaining Pokedollars. Routes are listed together with gyms of a particular region, and both provide rates of Pokedollars per defeated Pokémon.

These tables assume that

The columns include all the various combinations of gaining Pokedollars with items and oak items that apply a bonus to money gained.

Retrieved from "https://pokeclicker.miraheze.org/w/index.php?title=Poke_Dollar&oldid=7592"
Cookies help us deliver our services. By using our services, you agree to our use of cookies.